A simple guide to plots in Derabassi 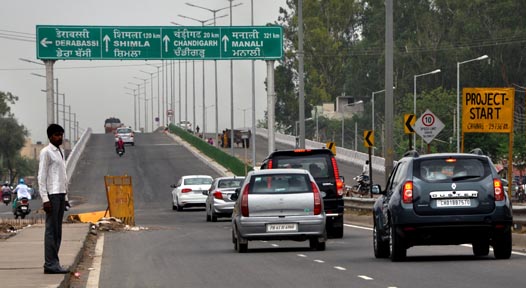 Derabassi is a satellite town on the Ambala-Chandigarh highway near Zirakpur.

The distance from Derabassi to Chandigarh is approximately 10 km. The town is often considered a part of Zirakpur since only a couple of Kilometres and a flyover separates the two towns.

Derabassi is a major industrial and educational hub in Punjab. It is situated on the border of Punjab and Haryana and Ambala is only a half an hour drive from the town.

The cost of living in Derabassi is relatively lower than in Zirakpur and Mohali. For example, a 3 bhk apartment that costs approximately 15 to 16 thousand in rent at Zirakpur is available for almost half the price at Derabassi.

Derabassi rose to prominence in the real estate market of Tricity around the year 2012-13 when some real estate companies started selling plots in Derabassi in organized townships.

This was a massive success as people gobbled up the inventory quite quickly in the initial stages. However, there are many examples where it was revealed later that the projects lacked proper permissions.

Many unfortunate people who had bought plots there do not have water and electricity connections even today. So one needs to be very careful in choosing to buy a plot in Derabassi.

Approximate pricing of plots in Derabassi

A typical dimension for a 100 square yard plot in derabassi is 20’ x 45’.One can buy plots ranging from 80 square yards to 300 or more square yards.

The difference is due to location and the amenities.

ATS Derabassi is a good option in derabassi that sells its plots for 20,000 rupees per square yard at the time of writing this blog post.

There are some projects on Gulabgarh road which sell for 16 to 17 thousand rupees per square yard.

Then there is Haibatpur road where you can get a plot (fresh or resale for 12 to 13 thousand per square yard) even less in some places.

Though I would recommend that one be extra careful while dealing with individuals in this area since cases in the past have surfaced where individuals were conned.

It can be safely assumed that If one is purchasing a residential plot in derabassi, they intend to build a house on it.

The reason is that people who like to have their own house like an independent house do not have too many options in Zirakpur.

There are not too many plots in Zirakpur and even if you get one the price is high.

So a lot of people from Himachal, Punjab, and Haryana who want to build their own house do so in Derabassi.

How to get a house constructed and approximate pricing

It is natural that once you have bought a plot you’d be looking to construct a house on that plot.

If you want to construct a house on a plot in derabassi you will have to pay a construction cost of approximately 1200 to 1300 rupees per square feet at the minimum.

This price may have increased in recent times but one needs to be careful while selecting the contractors.

There have been many instances where some shady property dealers who also work as part-time contractors have started work but then left it midway after getting payments from the client.

My recommendations for Plots in Derabassi

Like I said if you are short on budget and looking for a plot in Derabassi you should be careful and work on only a handful of properties.

I will suggest that you take a look at ATS plots in Derabassi. The BSP for these plots is 20 thousand rupees per square feet but the best part is that they are part of the ATS township and ATS is a reputed brand name.

If you are looking for budget options in plots let me know kindly get in touch and I can get you some reliable options.

It is always advisable that one checks the RERA certification of the projects before investing. The projects in Derabassi can be checked on the Punjab Rera website here: PB RERA

Advantages of living in Zirakpur

The cost of living in Derabassi is cheaper than the cost of living in nearby areas such as Zirakpur.  One can expect to get a good duplex on rent in a decent society such as Gulmohar extension for approximately 7 to 8 thousand rupees per month rent.

A similar house or a 3 bhk flat in Zirakpur will cost you at least 16 to 18 thousand rupees per month in Zirakpur.

The maintenance fee of societies is also lower. Even otherwise Derabassi is a cheaper place to live than Zirakpur.

Derabassi has a lot of open spaces so the place feels quite open especially in areas such as Gulabgarh road and Haibatpur road.

This is not necessarily true for other places in Derabassi but these two roads definitely give a feeling of open space.

The property prices in derabassi are cheaper compared to Zirakpur and Mohali. Be it apartments, independent houses, or plots.

The areas such as Haibatpur road are quite close to old Ambala road and once the airport road has completed this area could see some increase in prices due to its proximity to the road.

If you are someone who wants to buy an independent house on a budget Derabassi is your place to be. You can find good inventory for independent villas and Kothis in derabassi.

If you think of it Derabassi is located quite centrally. It will take you less time to reach the airport road from derabassi than it would take from many parts of Zirakpur.

If you work towards Ambala then it is even better. Derabassi is close to the national highway and old Ambala road.

Disadvantages of living in Derabassi

Pollution due to industries

One of the main disadvantages of living in a Derabassi is the pollution due to industries. You can smell the pungent odor on most days due to chemical factories.

You need to keep this in mind while selecting a property or a plot in derabassi. Select properties that are away from the industries.

Flyover traffic jam in the mornings

The derabassi-zirakpur flyover can see some minor traffic jams during peak hours so one needs to keep that in mind and keep an extra 15 minutes due to the distance if traveling via the national highway.

If you are buying a property in derabassi be ready for sights like garbage on roads etc. This is especially true for areas that are a little on the interior.

That is why it is important to select good societies with good maintenance. I am also not too keen on independent houses unless it is in a gated society.

Roads and Infrastructure is not very good

Derabassi is still more or less a rural town. You should be ready to face problems that one normally associates with such towns.

Interior roads are full of potholes and electricity can sometimes be an issue, but maybe this is why the property here is cheaper than Zirakpur and Mohali.

I have worked and lived in Derabassi for quite some time. If you need any guidance or help regarding purchasing a property in Derabassi, do let me know. I can help guide you towards reliable people and products.